Week 2 GOTW A Bust But For Two Lucky Pool Members

It was a command decision that went sour. On Friday the commish veered away from our originally scheduled Week 2 GOTW between the Bengals and the Cowboys in favor of a Monday Night Football that featured two prospective AFC powerhouses. Alas, it was an unwise decision as Cincy/Dallas turned out to be one of the top games of the weekend while MNF revealed one of the contenders to be a stud and the other a dud.

Last night at Highmark (formerly Rich) Stadium, the Buffalo Bills trounced the Tennessee Titans 41-7 in a tilt that was all but over midway through the third quarter when both teams rolled out their junior varsity players to finish out the string. Prior to being pulled in favor of back-ups, Buffalo’s do everything quarterback, Josh Allen, threw for over 300 yards (317) and 4 TDs. Allen’s counterpart, Ryan Tannehill, was the opposite of prolific with only 117 yards passing and a pair of interceptions thrown.

The bigger news on the night - as always is in Bizlax action – was the score. Sevens were wild and even though the Bills did their part to add to the overall tally, the Titans offense was kaput. Other than an opening drive TD rush by Derrick Henry that tied the game at 7, Tennessee could not muster any momentum and remained stuck in low gear for the night. What that created was a bog down on the scoreboard – frustrating for most, but a boon for two lucky winners who hit twice on the night.
Let’s see who they were and how they got there.
1st Quarter
Monday Night Football looked like it might live up to its Prime Time status from the get-go as both teams traded touchdowns on their opening drives. Buffalo would threaten again late in the quarter, but with their backs to their own end zone, the Titans busted up a 4th & 1 play with just over a minute to go. That preserved the 7-7 score and the first of two pool hits for “Mojo” ($100) and “Drunk Webkins” ($50).
2nd Quarter
The second quarter was scene to a gruesome injury when Buffalo defensive back Dane Jackson was a victim of friendly fire taking a helmet-to-helmet hit from a teammate that bent his head back 90-degrees like the top of a Pez dispenser. Ugly. At last report, Jackson was undergoing a Catscan, but had full mobility of all extremities. Whew!

In scoring action there was a potential “Whew” moment of its own as the Bills held a 10-7 lead and faced a 4th & 1 late in the half. Should Tennessee make another 4th down stop and keep the score as is then we’d be reporting that “Manimal Lust” and “Kelly 5215” were your second quarter winners, but Allen scrambled to his left and then fired right to a wide open Stefon Diggs for a 4-yard score that had “Mojo” and “Drunk Webkins” intoxicated in further pool winnings on the 17-7 halftime score.

3rd Quarter
The Bills blew the lid off in the third. A 46-yard bomb to Diggs, another Allen/Diggs connection for 14, and a pick-6 by gumba Matt Milano had the Bills off to the races. By the time the smoke had cleared the score was 41-7 and Case Keenum (Buffalo) and Malik Willis (Tennessee) were at the helm for each team signifying the white flag had been waved on any serious football for the rest of the night.
With the excitement of the game over, it was fitting that “Dead Man” would capture the hit on the 1 (Buff) & 7 (TENN) combo in the $100 pool. “Dave Mal” would nail $50 on the second sheet.
4th Quarter
Both teams simply played out the string in the final frame and had most football fans going lights out for the night. Those that hit the rack early missed nothing in the fourth as it was scoreless and the 41-7 score stood up again for “Dead Man” and “Dave Mal”. 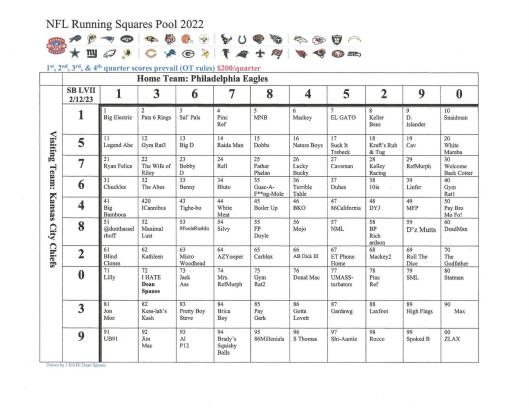 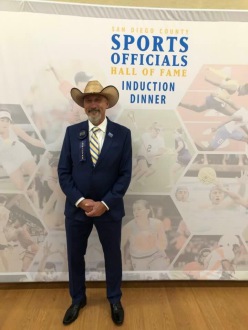 Delivered fresh to your door by Big Electric!!!